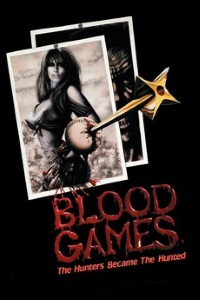 ”I have been pushed around my whole life by lousy men and I’m sick of it!”

A common refrain sung during every viewing of Meir Zarchi’s immortal 1978 exploitation classic I SPIT ON YOUR GRAVE goes a little bit something like this: “all the men in this movie are assholes!”. And yes, they are. That’s kind of the point. In a genre which typically depicts women as bubble headed life support systems for easy access vaginas, Zarchi’s film comes across as a nasty bit of tit for tat, a sucker punch right to the balls of self entitled, hyper masculine men.

Tanya Rosenberg’s 1990 pseudo rape-revenge actioner BLOOD GAMES tries to play the same tune. We begin at a softball game somewhere in the middle of Hicksville, USA. A bevy of beauties in short shorts beat the ever living snot out of some good ol' boys on the baseball diamond. This triggers a regressive and altogether violent response from some of the local men. With two of their own nearly raped and their head coach stabbed, the girls make a getaway attempt in the team bus, killing a man in the process. Unfortunately, a war hungry, ex-military misogynist and his army of beer swilling rednecks are in hot pursuit. Once their getaway fails and the gloves come off, it’s an all-out battle of the sexes, albeit one with baseball bats, crossbows and hunting rifles.

Virtually every negative action in this movie is caused by a man. The all-male baseball team repeatedly grabs their opponent’s asses, even throwing an elbow into the face of a woman running to second base. Had the girls simply left after the baseball game was over, all of this would have been avoided, but their head coach (who is also the father of our lead protagonist) feels compelled to hold someone up in a bar bathroom just so he can get money owed to him from a bet. The would-be rapists are not just looking for action but for revenge. The misogynist bastard leading the rednecks into battle repeatedly scolds his son for losing to a bunch of broads. It’s just a cascade of toxic masculinity, self entitlement and unhealthy machismo all the way down.

But unlike Zarchi’s film which goes out of its way to avoid the simple, gross sexualization of the lead character, Rosenberg gives us a playful, nudity filled shower scene, endless shots of asses in barely-there shorts, and copious glimpses of bouncing breasts. It also plays the same end game as SAVAGE STREETS, another exploitation film with loose female empowerment goals. Both films give us strong heroines who collapse in fear at the sight of the big bad guy they just seriously injured. Now maybe it’s just me, but I’ve always found this sort of thing a bit confusing. While there’s no doubt that a sexually attractive, scantily clad woman can also be empowering, inspiring and even awe inducing, the clash between sexploitation visual tropes and a genuine female empowerment message can sometimes create a film which doesn’t quite practice what it preaches.

BLOOD GAMES avoids the typical slasher film idea of a single underpowered and underprepared woman overcoming an aggressive male threat. Despite the understandable fear of being shot to death, it’s bevy of ass kicking beauties are more than capable of aggression. We understand that they can easily handle this threat. But it seems the film often wants me to gawk at asses more than it wants me to pump my fists in solidarity, and that threw me off during some of the more tense moments the film offers up. The final half of BLOOD GAMES is great stuff, just a classic 90s action film set in dense woods. I feel the film might have been better off leaving the sexploitation visuals behind at that point. Unfortunately, they persist through most of the film, cluttering up the message along the way.

But perhaps I’m simply thinking too much about this. From start to finish, BLOOD GAMES is an absolute blast, a nicely executed and potent piece of exploitation cinema. It’s not a flashy film, but it’s certainly effective, perfectly paced with an engaging cast and some rather effective action set pieces. It’s also a great bit of cornball fun that would definitely tickle the fancy of Andy Sidaris fans everywhere. So if women in short shorts killing rednecks in the woods sounds like your cup of tea, by all means, sip away.