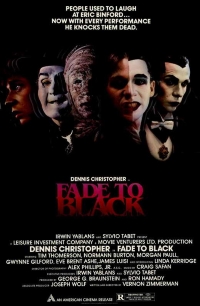 Vernon Zimmerman's 1980 slasher-thriller FADE TO BLACK is a film I probably would not have enjoyed as much had I seen it as a teenager. On its surface, it's a slasher film like every other slasher film. We have a lead, a loner named Eric Binford, who develops a serious crush on a wannabe actress who bears a striking resemblance to Marilyn Monroe. After he is stood up on their first date, Eric's already tenuous grasp on reality slips, leading him to commit a series of murders.

That's the gist of the film. That right there comprises the majority of the films narrative, with the addition of a hippie psychologist and his cop girlfriend tossed in to help bring the film to its bloody conclusion. But FADE TO BLACK, like SCREAM, VIDEO VIOLENCE and PEEPING TOM, embraces the old canard that birthed, among other things, the Video Nasty scandal. Beneath the ordinary surface of slasher film cliches and tropes lies the old argument. The pathology of cinema, the idea that perhaps exposure to violent media can lead to violent behavior.

Eric's first violent encounter has him pushing his wheelchair-bound mother down a flight of stairs as scenes from KISS OF DEATH, Henry Hathaways's unnerving 1947 film noir, are inter-cut with his actions. He then changes his name (and his behavior) to Cody Jarrett, the murderous, morally corrupt lead from Raoul Walsh's WHITE HEAT, before assuming the identity of several film characters for a batch of killings that sees him punishing everyone who abuses him.

But truth be told, the argument at the core of FADE TO BLACK isn't so much one of “do violent movies cause violent behavior?” as it is “does escapism come with a cost?”. Eric doesn't really have much of a life. He lives with his mother, does a poor job working at a film distributor, and spends most of his time chain smoking, a behavior we assume comes from watching classic films where the handsome lead always had a cigarette dangling from his lips. Instead of people skills, Eric has a vast knowledge of movies. When he first meets the Marilyn lookalike in a diner (it doesn't help that her name actually is Marilyn), he attempts to woo her with his knowledge of Monroe films. There is no real normal small talk. When he attempts to win her over with movie trivia, he even addresses her as if she were Marilyn Monroe, asking her what movie Tom Ewell took her to see in THE SEVEN YEAR ITCH.

We quickly begin to learn that for Eric, reality is largely an inconvenience. It's just something he has to deal with from time to time. Eric feels more comfortable with movies than he does with the reality around him. When confronted by the sometimes harsh realities of ordinary day-to-day life, Eric prefers the realm of escapism because it provides him solace and answers. Eric might not know how to deal with being bullied, but Hopalong Cassidy certainly would. After being rejected by a prostitute, Eric takes on the persona of Dracula, because, after all, women don't say no to the Count. The finale finds Eric completely enveloped in the personality of Jame Cagney's Cody Jarrett. And why wouldn't he be? Jarrett, like Eric, was a man who felt he deserved more than he was worth, but unlike Eric, Jarrett didn't take no for an answer and wasn't above putting those he felt were beneath him in their rightful place.

FADE TO BLACK might not be the most successful at pulling off this kind of self-reflective ambition, but the film bristles with psychological intrigue. Buoyed by a fantastic lead performance by Dennis Christopher, Zimmerman's film teeters between gleeful self-parody and fierce self-analysis. It's free of any overburdening pretentiousness, largely because, as much as it is a straight-up meta-horror film, it is also structured and presented as your standard slasher film. It has a serious question at its core, one that deserves less dismissal among film fans, but it is presented in a way that allows you to ignore it. You don't need to engage with the film on any kind of intellectual level to enjoy it. As a pure slasher film, it works just as well.

But bear in mind that the film was meant for people in their 30s and above. It is drowning in references to the cinema of the 1940s and 1950s. When I was teenager, I highly doubt I would have gotten much out of the references and homages (outside of the clever PSYCHO homage, that is). Part of the fun is watching some of these references get turned on their head, like watching a good guy like Hopalong Cassidy gun down a bully in the middle of a dirty alleyway. The film does assume its audience has some knowledge of classic cinema. I'm sure you can ignore much of it and still enjoy the film, but if you, like Eric Binford, have spent your days absorbing the classics and the not-so-classics of the Golden Age of cinema, FADE TO BLACK will truly blossom before your eyes into something expertly clever and ghoulishly surprising.