After flirting with science fiction in GHIDORAH, THE THREE-HEADED MONSTER, the GODZILLA franchise tumbled straight down the sci-fi rabbit hole with their next film, GODZILLA VS MONSTER ZERO. A race of aliens from Planet X, a small, recently discovered planet orbiting Jupiter, contact Earth and offer a deal. They explain that their home planet is under attack by a creature they call Monster Zero. They wish to “borrow” Rodan and Godzilla in hopes that the monster duo can kill the rampaging beast. In exchange, the aliens will give us a cure for all known diseases. The humans agree to the deal and the aliens scoop up Rodan and Godzilla, transporting them to the surface of Planet X. It turns out that Monster Zero is none other than Ghidorah. The monsters fight it out and Ghidorah retreats. But the aliens have another reason for wanting to get their hands on Rodan and Godzilla. Their planet is running out of water. That makes Earth a prime target for a hostile takeover. They use a mind control device on Rodan and Godzilla and bring them back to Earth, ordering the monsters to trash everything in sight. Eventually, the humans manage to break the alien’s control over the monsters and Rodan and Godzilla confront Ghidorah in the final battle.

Fans of the franchise spotted something odd during the film. There are moments when the monster carnage depicted is clearly lifted from other films. Footage from GHIDORAH, THE THREE-HEADED MONSTER, RODAN and MOTHRA was repurposed and inserted into the edit, a cost savings measure that would become more and more frequent as the series progressed. While much of GODZILLA VS MONSTER ZERO looks great, it is obvious that corners were cut here and there. Some of the matte paintings, props and costumes look cheap. The fights scenes were no longer being filmed at high speeds, a process that was costly and cumbersome. The film was a noticeable step down in quality but still managed to be everything a GODZILLA film should be, fun, fast moving and full of monster action. That’s more than can be said about the next installment.

After their boat is attacked by a giant crab monster called Ebirah, a young sailor and his three companions find themselves stranded on a strange island. There they discover a secret nuclear assembly plant run by terrorists. As they try to escape, the terrorists give chase. The foursome conveniently finds Godzilla sleeping in a nearby cave. Using lightning, they manage to wake the slumbering beast. Godzilla wrecks the plant and fights Ebirah while everyone else tries to escape the island before the stored nuclear devices explode. That is about all the story GODZILLA VS THE SEA MONSTER has to offer.

Throughout the 1960s, GODZILLA films began to perform worse and worse at the box office. Television quickly became the most popular medium in Japan and all of the studios were feeling some level of financial discomfort. GODZILLA VS THE SEA MONSTER was originally set to star King Kong, but attaching Godzilla to the production gave the film a larger box office draw and a much better opportunity to turn a profit. But in order for the film to stand a chance at returning on investment, many more corners would need to be cut. The effects budget is noticeably reduced, allowing for fewer miniature sets and less intricate monster battles. Most of the action happens outdoors, either in the water or in barren locations. It feels strange. It’s easy to see why King Kong was the original choice for the lead monster. The setting suits Kong much more than Godzilla. It’s like they just swapped names without any consideration of how the film would turn out (they even left in the scenes where Godzilla has his attention swayed by a pretty young island girl, a plot strand that screams King Kong). All of these things result in a GODZILLA film that feels nothing like a GODZILLA film. To make matters worse, none of the changes helped the property at all. The film performed poorly at the box office.

SON OF GODZILLA followed shortly after. The first GODZILLA film made explicitly for children, SON OF GODZILLA deals with the sudden mutation of mantises on the Sol-Gel Island in the South Pacific. The mantis monsters stumble upon a large egg and break it apart. Inside is a baby Godzilla (commonly referred to as Minya or Minilla, though never named during the course of the movie). Godzilla defends his child, defeats the mantises and then proceeds to engage in cutesy moments with the temperamental little tyke for the rest of the running time. A giant spider monster called Kumonga threatens Godzilla, his son and a group of UN scientists stationed at the island to study weather patterns. Predictably, Godzilla defeats the monster with relative ease. At the films end, the scientists freeze the island and flee, leaving Godzilla and his son in peace.

This is honestly one of the worst films I’ve ever seen. Granted, I’m not the target audience but even as a kid this film made me want to pull my hair out. It was obviously an attempt to muscle in on the lucrative children’s market that Daiei Co., Toho’s main rival, had cornered with its series of GAMERA films. It is desperate, desperate in every way. This was a simple attempt at a cash grab, betraying the entire franchise in hopes of reaping some quick revenue. The budget restraints were carried over and as a result the look of the film is flat and uninteresting. Adding insult to injury is Minya himself. What an absolutely hideous looking creation. All of the attempted laughs fall flat and every single scene feels juvenile and pathetic. The film does have a few things to say about environmental issues, especially overpopulation and the speed at which we are depleting the environment of natural resources, but everything is lost in an obnoxious haze of sight gags and children’s humor.

SON OF GODZILLA turned out to be a box office bomb, drawing in less than 2.5 million ticket buyers at the Japanese box office, the lowest total yet for a GODZILLA film. The overseas market had completely dried up and with it the prospects of carrying on the GODZILLA franchise into the 1970s. It was time to end the whole monster craze and producer Tomoyuki Tanaka decided to send it out in style. Back on board were director Ishiro Honda, composer Akira Ifukube and special effects genius Eiji Tsuburaya. Writing the screen play would be Takeshi Kimura, the screenwriter of many non-Godzilla monster films, most notably RODAN. Given a much larger budget and a much more relaxed shooting schedule, DESTROY ALL MONSTERS would be the ultimate monster fest, bringing on board virtually every major GODZILLA monster and even a few from outside the franchise. Gorosaurus, Manda, Baragon and Varan fighting alongside Godzilla, Minya, Mothra, Rodan, Kumonga and Anguirus in an epic battle against Ghidorah? What could possibly go wrong?

Well for starters, the promised monster fest doesn’t really kick in until 20 minutes before the closing credits. Sure there are extended scenes of monsters destroying cities and landscapes but audiences were promised an all out orgy of monster on monster action. What they got instead was a solid hour of science fiction drivel. An alien race, the Kilaaks, abduct all of Earth’s monsters from Monsterland, a deserted island in the Pacific that is home to all the various monsters in the Godzilla universe. The aliens release the monsters in major cities across the world as a distraction from their base building exercises near Mount Fuji. It is revealed that the monsters (surprise, surprise) are all being mind-controlled by the Kilaak. The United Nations Science Committee orders a captain and his crew to track down the source of the alien’s mind control frequencies. Once the system (which is on the freaking moon, by the way) has been destroyed, the monsters all return to Monsterland. In retaliation, the Kilaaks summon Ghidorah and the much anticipated monster battle begins. That’s quite the set-up for a single monster battle that barely lasts ten minutes. 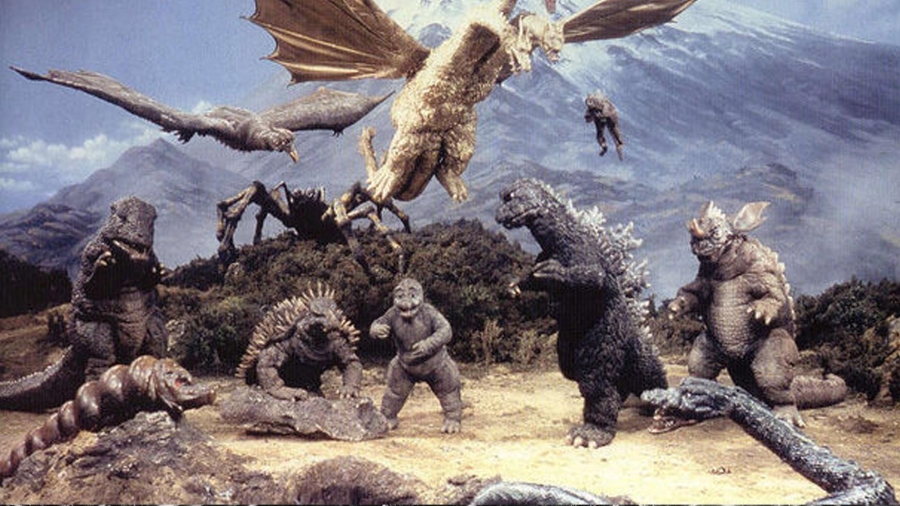 There are random moments of destruction sprinkled throughout the film. Godzilla trashes New York, Rodan flies around Moscow, Gorosaurus burrows out of the ground in Paris, Manda slithers through London and Mothra trashes Beijing. These are really some of the most interesting scenes in the entire film. We rarely see these monsters destroying anything other than tourist spots in Japan. The miniature work done by Tsuburaya and his team of model makers is superb, a much needed return to form for the franchise after the budget-starved GODZILLA VS THE SEA MONSTER and SON OF GODZILLA, both of which take largely place in barren, outdoors areas. But these scenes of destruction are all short and unevenly spaced out in the narrative. Yes, it scratches the itch and makes the wait seem less painful, but again, as with GHIDORAH, THE THREE-HEADED MONSTER, the human side of the story just sucks the life out of everything. But then we get to the ending. And although it’s brief, it’s glorious. Ghidorah shows up, shoots a few lasers and then the beat down to end all beat downs plays out in awesome rubber suit monster fashion.

I must admit, though the finale is spectacular fun to watch, it does seem strange to see all these former enemies tag teaming Ghidorah. By the time the three-headed space dragon puts his feet on land, all of the monsters have lined up behind Godzilla like soldiers waiting for their general to yell “charge”. But all nitpicks vanish once the shit hits the fan. The battle is an amazing sight to behold, especially when you think of the logistics and choreography, with each of the monsters getting to showcase their unique fighting styles. Anguirus goes for the neck like a bucktoothed bulldog, Mothra and Kumonga try to cocoon Ghidorah in their webs, Gorosaurus does a kangaroo kick, Rodan uses his wings to create gusts of wind and Godzilla throws punches like a prize fighter. Even the hideous Minya gets a good blow in, choking one of Ghidorah’s necks with a smoke ring. Once Ghidorah’s down on the ground, the monsters gang up and stomp him to death. It’s brutal, fun and exhilarating.

DESTROY ALL MONSTERS has some major problems. As mentioned, the human side of the story is needlessly complicated and occupies way too much screen time. We’ve already seen this story once before in GODZILLA VS MONSTER ZERO. We didn’t need to see it again. It’s bland, extremely black and white in terms of characterization and lacking in any real suspense or intrigue. Everything that doesn’t deal with monsters is forgettable and that’s a real problem for a movie that is 80% aliens/humans and 20% monsters. Like GODZILLA VS MONSTER ZERO, the film also recycles a decent amount of footage from other GODZILLA films, sometimes in extremely jarring ways. It may sound like I hate this film but honestly it ends on such a celebratory high note that it’s hard to really dislike it. For 20 minutes, DESTROY ALL MONSTERS is the film that every kid had always wanted to see. It’s those 20 minutes that really matter here and they are glorious.