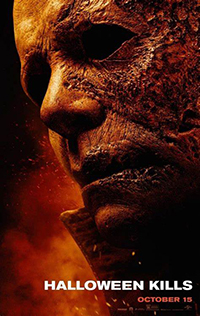 HALLOWEEN KILLS is one of the most inconsequential movies ever made, a middle installment in a pre-planned trilogy of films that contains one single plot point of importance, the death of a main character that occurs in the final 15 seconds of this nearly two-hour-long film. Instead of adding depth and breadth to characters first introduced in the 2018 franchise reboot, returning director David Gordon Green (along with his co-writers Danny McBride and Scott Teems) decide instead to give us a parade of new characters, fresh faces that manage to last little more than a few minutes before being slaughtered. In practice, the film feels more like torture porn than a traditional slasher, its best and most high-energy moments being devoted to graphic bloodletting and slow, torturous murder set-pieces.

It’s a body count film, through and through, padded with scenes of characters endlessly droning on about the existential crises of past trauma, survivor’s guilt and the nature of evil, all deepities and faux-profundities hamfistedly thrown into the script in an attempt to add dramatic legitimacy to a film which gleefully throws basic logic to the wind at a moment’s notice. This is the kind of film where a discussion of mob mentality occurs just before a man has his eyes sloppily gouged out and where a character deep dives into the transcendental nature of fear while a main character has his brains squashed with a baseball bat. To say the movie feels at odds with itself is an understatement.

I would be far more forgiving of the film had it contained a story worth watching, but sadly HALLOWEEN KILLS feels on autopilot for the entirety of its running time. When the film starts, we’re treated to a nice surprise. Officer Hawkins has survived his injuries. Before being carted off to the hospital, he declares that he will be the one to stop Michael. We then catch up with the survivors of John Carpenter’s 1978 original as Tommy Doyle, Lonnie Elam, Marion Chambers, and Lindsey Wallace attend a talent show in a local bar. Their festivities are cut short when news of Michael’s return hits the airwaves. Tommy then declares that he’ll be the one to stop Michael. Then it’s catch-up time with Laurie, her daughter Karen and granddaughter Allyson. Laurie is rushed to the hospital, stitched up, and sedated. She too will eventually tell us that she will be the one to stop Michael.

Spoiler alert: no one stops Michael. I guess evil dies next year.

To make a threadbare story short, Tommy gathers up a mob of Haddonfield citizens (a la HALLOWEEN IV: THE RETURN OF MICHAEL MYERS), most of whom decide to congregate at the local hospital while the five or six cops on the Haddonfield police force just… I don’t even know. There are a few at the hospital but clearly Green forgot that towns have cops. Tommy and his cohorts agree that there’s strength in numbers right before deciding to split up into smaller groups. At the hospital, Laurie and Karen bitch at each other, while Allyson runs off with her ex-boyfriend Cameron and his dad Lonnie. Everyone else just dies.

Now I understand what Green and Co. were attempting to do with the Tommy Doyle side of the story here. The mob frenzy angle was an interesting one at first, clearly drawn from real-life events like the Boston Bomber fiasco driven by Reddit users, but it never pays off in any meaningful way. We see one of Michael’s fellow escapees, a short fat guy running around town. He makes his way to the hospital and is swarmed by angry residents. He is chased into an upstairs hallway. As the frenzied citizens go about breaking through doors to reach this poor confused man, our escapee shatters a window and jumps to his death.

This is a scene near the midpoint of the film and it’s handled in a much more sensitive (well until you see the man’s shattered, bloody mess of a body lying in a puddle of brains on the pavement), dramatic fashion than anything else in the movie. This is clearly the payoff to Green’s underlying statement about the madness of mobs and the way vigilante justice rarely lives up to its name. After the man splatters on the ground, Tommy and his gung-ho lynch mob take but a brief moment to contemplate their actions. But once they realize the man isn’t Michael, they just go right back to patrolling the streets and chanting in the hospital hallways.

Not that it matters much as the Michael Myers of HALLOWEEN KILLS is invincible. That’s a major problem, my friends, because it creates a film where we have no reason to care at all about the fates of the various characters Michael comes across. It’s a bit like rooting for the military in a Godzilla film. Why care if they’re just gonna die? And die they do, messily and frequently. Eyes are popped and/or stabbed out, heads are split, necks are twisted and bones are broken, over and over again and with such ease that it feels like watching someone play a video game with god mode turned on. There’s no ingenuity to any of this. Michael just lunges from closets and open doorways again and again while soon-to-be corpses just stand around waiting to die. The only reason anyone at all survives HALLOWEEN KILLS is that they’re needed for the sequel.

The HALLOWEEN franchise is famous not for its body count, but its attention to suspense and tension. None of that exists here. There isn’t a single frightening moment in this film. There are no drawn-out stalking sequences, no playful fake-outs, or carefully constructed scenes of cat and mouse. This movie is as blunt as an atomic bomb, trading skillful suspense filmmaking for endless scenes of gouging, stabbing, and bludgeoning. I enjoy a strong dose of movie violence as much as the next guy, but the relentlessly lazy assault on bodies and extremities on display here left me bored to the point of distraction. Having characters you care for, characters who can navigate the threat or at the very least stand a fucking chance is necessary for making a scary film. If the audience is asking itself “when is this character going to die?”, there cannot be suspense. You need the audience to be asking “will this character survive?” instead. And unfortunately, death in HALLOWEEN KILLS is just a foregone conclusion. After all, how can anyone fight a masked maniac who everyone agrees is nigh-indestructible?

The lack of meaningful stakes and narrative development makes HALLOWEEN KILLS a film without purpose. I suppose it is at best a celebration film, one explicitly created for the people who fast-forwarded through all the talky bits of the previous installments just to watch the murder scenes. The fan service comes fast and furious too. We get a pitchfork in the back like in HALLOWEEN V: THE REVENGE OF MICHAEL MYERS. Good ol’ Leigh Brackett gets a cringe-worthy moment where he repeats his “everyone is entitled to one good scare” line. Someone mentions Ben Tramer. Laurie caps off a speech about fear breeding weakness by stating “that is the true curse of Michael Myers”. It’s all… well, it’s incredibly fucking painful to watch. This feels like a fan film made by people who don’t understand why HALLOWEEN 1978 is special, why it works, and why it continues to resonate today. All they remember is that scene where Michael stuck his thumb through a guy’s forehead or how cool it was when Michael tacked Bob up to the wall with a kitchen knife.

Moreover, the movie is just stupid. At one point Michael climbs onto the roof of a parked car and the characters inside decide to lock the doors instead of, I don’t know, running away or driving off? A woman struggles to unlock a single deadbolt on her back door, gives up, and just stands there waiting for Michael to drive a broken light tube through her neck. Another soon-to-be victim stands in place as Michael slowly walks over to him to administer a knife to his gut. After the escapee takes a swan dive out of the hospital window, Tommy questions whether the man splattered on the ground is Michael. “He always wears a mask”, Tommy says. “How can we be sure?” I don’t know, Tommy. Maybe think back an hour to when you sat and watched a news report on Michael’s escape and they LITERALLY SHOWED HIS FACE. The police inside the hospital do nothing at all to quell an angry mob, let alone patrol the streets, and even when they do turn up at the end of the film, Michael can ninja past a dozen cops and bystanders to sneak his way back into the Myers house. Not to mention, none of these bystanders and police officers heard two dozen people screaming and dying a single city block away?

You can nitpick this film to death, but why bother? It’s a nothing film, a nearly two-hour-long bottle episode that does nothing to further the franchise. It can’t even stay in line with its own pre-existing story. Remember when everyone thought Laurie was a nutjob in the previous film? Now they’re applauding her in bars. Remember when we thought Michael was an enigma driven by some internal - possibly malignant - force? Now he’s just a guy who wants to stare out his sister’s bedroom window. All the goodwill generated by the previous film is flushed down the toilet here. The only good thing about HALLOWEEN KILLS is when it eventually fades from your memory a couple of hours after the end credits roll, you won’t need to rewatch the entire film to remind yourself what happened when HALLOWEEN ENDS comes out in 2022. You can just watch the last 30 seconds. It’s quite literally the only meaningful event in this entire film.