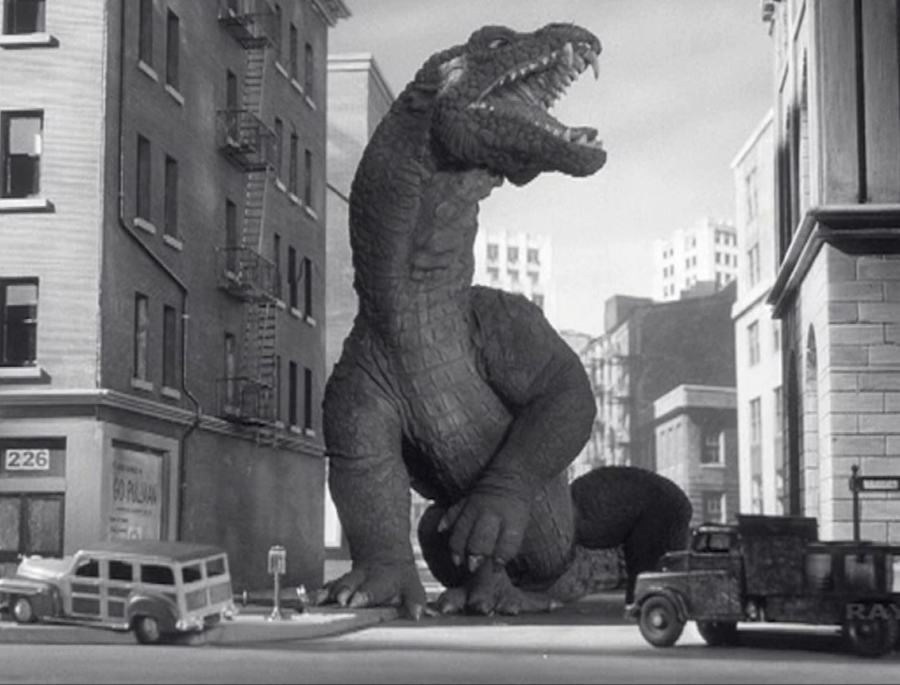 And here it is, the granddaddy of the nuclear monster film, Eugene Lourie’s 1953 cult classic THE BEAST FROM 20,000 FATHOMS. Within the films short 80 minute running time are the seeds for an unfathomably popular, incredibly diverse group of monster films that include GOJIRA, THEM! and GORGO. It is the first popular film to deal with a giant monster awakened or created by nuclear testing destroying a major city and one of the very first science fiction films to deal explicitly with nuclear anxiety.

Somewhere deep in the Arctic, an American research team carries out a nuclear bomb test. While exploring the area of impact, two scientists spot an enormous prehistoric beast (a Rhedosaurus to be exact) just before an avalanche occurs, killing one of the scientists and injuring the other. As the surviving scientist, Thomas Nesbitt, lies recuperating in a New York hospital, several fishing vessels are attacked by the beast. After reading the reports in the newspaper, Thomas tries in vain to convince his Army friend, Jack Evans, and a world renowned paleontologist, Thurgood Elson, that the beast he saw in the Arctic is the same creature than attacked the fishing boats. The only person that believes him is Elson’s assistant, a beautiful young woman named Lee.

With the help of one of the fishermen that survived an attack by the rampaging Rhedosaurus, they finally manage to convince Elson. More unexplained attacks (including one on a lighthouse in Maine), convinces Evans that Nesbitt is not simply imagining things. Elson thinks the beast is headed for the Hudson River Canyon, the site where Rhedosaurus fossils were found years ago. He dives down to the floor of the canyon in a diving bell, spotting the creature and reporting back his observations before being killed. Shortly after, the beast crawls out of the water and rampages through the streets of Manhattan. The military attacks but is unable to wound the creature with ordinary gunfire. Taking aim at the soft tissue on the beast’s neck, they manage to wound it with bazooka blasts, driving it back into the river. But their attack has unforeseen consequences. The blood of the Rhedosaurus contains some kind of prehistoric virus capable of incapacitating or killing humans in a matter of minutes. Not wanting to risk mass sickness, Nesbitt and Evans come to a conclusion. They must use radioactive isotopes to kill the creature.

It probably doesn’t need to be said but THE BEAST FROM 20,000 FATHOMS is nowhere near as refined or effective as many of the films that came along after it. For starters, it is almost unbearably slow at times with the majority of the beast’s screen time pushed to the side in favor of people just talking. It also does the strange thing of having all the characters react in very subdued ways to all the weirdness going on around them. No one really seems too shocked at the sight of the creature. Even the people in the streets of Manhattan just kind of jog away from the monster. This has always been my biggest pet peeve with 1950s science fiction films. A flying saucer buzzes by a car and every one inside just says “gee golly, a flying saucer” like it’s no big deal. The tone of the film is very, very light so I suppose the reactions of the characters are appropriate, but I couldn’t help but want the film to be darker than it was.

But really that’s my only problem with it. Pacing issues aside, the story is really interesting. There’s a moment in the film where Nesbitt and Elson discuss epistemology and empiricism in a way that actually sounds like a genuine philosophical discussion and not just big words strung together in an attempt to make two actors seem smarter than the audience. The nuclear subtext of the film is not handled in the typical reactionary manner either. Instead of beating you over the head with allegory, the film keeps the message behind the medium and not before it, allowing it to share the stage with all the sci-fi pulp goodness. The final reel is one of the best around with Ray Harryhausen’s excellently designed creature destroying an extremely intricate Coney Island amusement park.

All good stories have to start somewhere and the nuclear age giant monster movie started here. For that simple fact, THE BEAST WITH 20,000 FATHOMS is a highly recommended film. But even without its place in monster movie history, I would still recommend seeing it. Yes, there are better examples of the monster film floating and stomping around but this movie has enough charm, artistry and memorable moments to really stand out.