A TALE OF TWO BLOBS 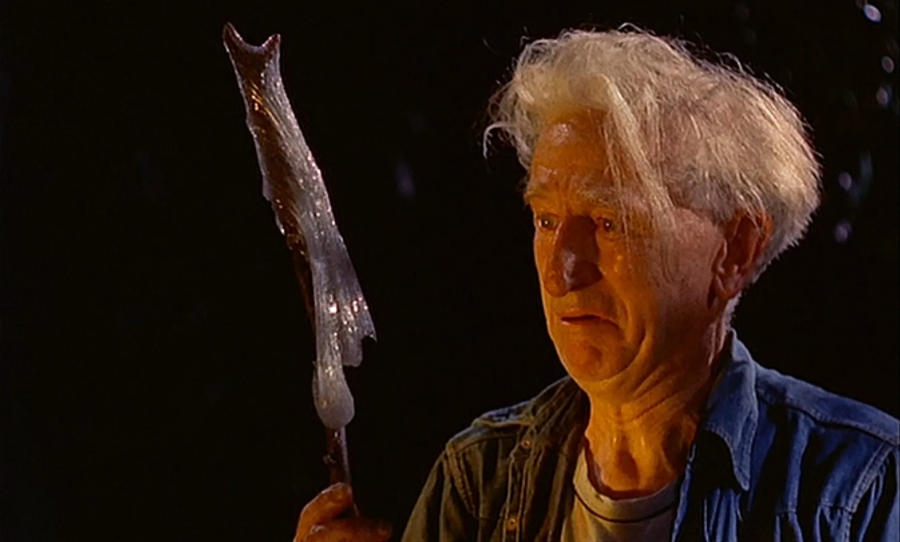 Something has crash landed in the woods outside a small Pennsylvania town. It isn't a space ship or some interplanetary probe. It's a meteorite, a small chunk of stone that just so happens to be filled with a sentient, viscous nightmare. In other words, a Blob. Its reign of terror begins simple enough, slowly devouring an old hermit. It then sloppily eats a nurse, then a doctor, then a mechanic before finally gobbling down a dozen or so late night moviegoers at the town cinema. Its ravenous appetite is limitless. Unfortunately, the only people aware of its presence are Steve and Jane, two teenage lovebirds unable to convince the townsfolk that their lives are in danger.

THE BLOB fits nicely into the Red Scare sci-fi b-movie trend of the 1950s. The setting is small town America where the coppers are all stand-up guys and the kids are viewed as delinquents in need of stricter parental supervision. Everything looks like a Norman Rockwell painting. Introduced into this environment is the “outsider”, the Blob, an entity that doesn't just kill the hapless denizens of Bumblefuck, PA, but assimilates them. Every body it absorbs makes it larger, more indestructible and, to fit the “fear the Russians” allegory, every ounce of flesh consumed makes it more and more Red. INVASION OF THE BODY SNATCHERS played a more sophisticated game with its Red Scare paranoia, with alien pods that replace everyday Americans with mindless (Communist) clones, but the underlying threat in THE BLOB isn't that much different. The more it consumes, the more it grows. Each flag waving individual it devours only makes it a more dangerous, more complicated threat to handle.

Like other 1950s sci-fi flicks, THE BLOB isn't just a great bit of sociopolitical commentary, it's also a great bit of fun. It had a smaller budget than most films of its kind and one would imagine that budget would have constrained the imagination of its director, Irvin S. Yeaworth, Jr. The fact that the film is as impressive as it is visually is a minor miracle. The Blob of THE BLOB is not your typical 1950s sci-fi monster. It isn't humanoid in design. It couldn't be faked through miniatures or puppets. Today, the effects are as expected, not mind blowing or even very convincing, but the sheer level of ingenuity on display in the film is definitely worthy of respect. By choosing not to use your average, ordinary alien beastie in their film, Yeaworth, Jr. and Co. created a schlocky shocker that feels unique within the pantheon of Alien Invasion flicks.

Of course, THE BLOB is also well known for being the feature film debut of Steve McQueen. He delivers a fine performance in the film (though no one would ever confuse the 28 year old actor for a teenager), understated and immediately likeable. In fact, the entire film is well acted, well scored, well filmed and well directed. It's a thoroughly enjoyable flick, one completely deserving of its cult status. But I think the most remarkable thing about THE BLOB is how refreshing it feels to watch.

There are no military men in THE BLOB. Not a single Army vehicle rolls into town to stop the menace. There's no cornball humor either, relying instead on subtle (and not so subtle) reversals of popular sci-fi tropes for its humor. It's also remarkably playful at times. I can imagine what it must have been like to sit in the glorious Colonial Theater in Phoenixville, PA, and watch the film play out. After all, the Colonial was the theater used for the famous scene of the Blob, massive and blood red, pouring from the projectionist booth into the auditorium, hungrily devouring every person it touches. It's a gag William Castle would have been envious of and it must have been quite the fright for the filmgoers catching a light night showing of the film.

At the climax, it isn't the military or a team of scientists that save the town from the great Red Scare. It's a collection of teenagers, cops, firefighters and other ordinary citizens. The only thing missing is a shot of Old Glory blowing in the breeze.

In 1988, Chuck Russell was brought aboard to helm a remake of THE BLOB by studio execs at TriStar. Russell had proven himself capable of helming large scale, effects driven films, even though he was still a newcomer to the director's chair. His previous film was his first, the mega money making A NIGHTMARE ON ELM STREET 3: DREAM WARRIORS. He was a good choice and he turned in good work, but just like John Carpenter's re-imagining of Christian Nyby and Howard Hawk's THE THING FROM ANOTHER WORLD, success was not in the cards for 1988's THE BLOB.

The remake begins by feeling an awful lot like the original. In fact, were it not for the hair styles sported by the cast, you might think this film was set in the 1950s. The boys all walk around in their varsity jackets with “gee golly” expressions on their faces. They're embarrassed to buy condoms in front of a priest and awkwardly meet their girlfriend's parents before going out on dates. They even go up to lookout point to neck and fool around. The film feels odd, especially for a sci-fi horror flick from the late 1980s. For the first third of the film, it feels drenched in the same quaint, quiet atmosphere of its forebear.

But the 1980s doesn't stay off the screen for long. While the film does follow the original almost beat for beat, the graphic violence that was the hallmark of 1980s horror shows up in full force once the Blob takes its first victim. And it doesn't let up. Thanks to advancements in special effects (and a nearly 19 million dollar budget, a massive increase from 110,000 spent on the original), the Blob of this THE BLOB is a much more terrifying beast. Yeaworth, Jr. was happy to give us a few glimpses of a man covered in slime from time to time, but Russell and his effects crew really put on a nasty show here. A man is pulled headfirst into a sink drain. A woman is crushed inside a telephone booth. A child is dissolved before our eyes. It's a wonderfully grotesque film with a monster that is far more proactive in its rampage, slinging tendrils through the air, slamming itself down on people running through the streets and even, in a scene that makes no logical sense, exploding out of the corpse of a young Erika Eleniak.

The graphic violence isn't the only bit of 1980s horror to worm its way inside the film. The cynicism that ran rampant through the decade is here in full force as well. Unlike the original, the Blob of this film isn't a space entity that accidentally crashed on Earth. It's a government experiment, a nasty bit of biological warfare that was shot into space because it was too dangerous to be kept on Earth. When it finally makes its return, the organism has been mutated by its time orbiting the planet. A group of military and government scientists show up, quarantine the town and go about trying to capture the Blob. Not for humanitarian reasons, of course. No, they want to use it again as a weapon. As a result, this small town with its small people is to be considered expendable. 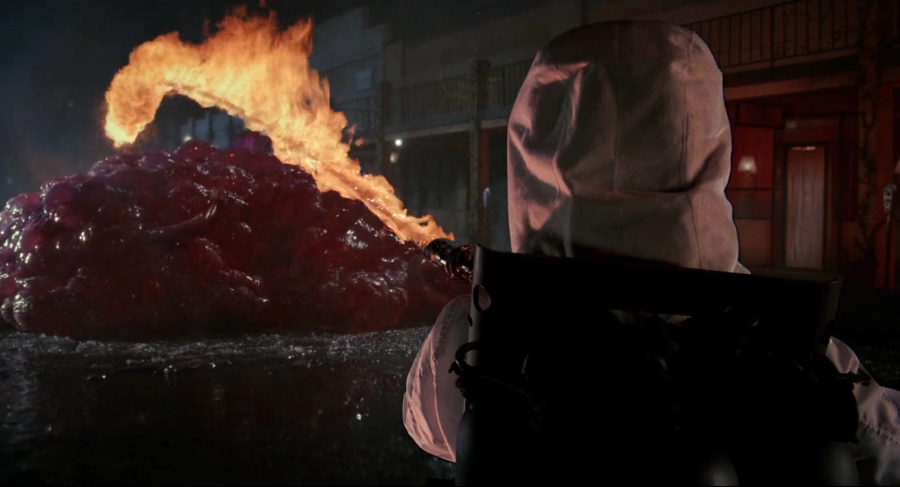 Russell's THE BLOB feels a bit too angry at times, or at the very least, a bit too bitter. The inclusion of government conspiracies and military men willing to let men, women and children die horrible deaths to secure the Blob… I would be lying if I said that the 1988 version of the film is far less enjoyable than the original, at least on a narrative level. There was a charming simplicity to the original film and that simplicity is gone here. The government boys and military men show up too late in the film to ever feel like more than just another plot complication. 1980s horror was rife with anti-authoritarian sentiment, but I'm not sure I can ever fully equate government men with a sloppy ball of acidic slime. That's what the film wants me to do. It wants to me to think that there are not two monsters in the film, the government and the Blob. There's just one. Anything government related is monstrous.

The film even ends with a psychotic preacher holding a bit of the Blob hostage in a glass container, waiting for the moment when God instructs him to unleash it once again on the world. All authorities are corrupt, all institutions evil. This is par for the course with many 80s horror films and really, by turning the Blob into just another man-made monstrosity, that's ultimately what Russell's film becomes. Just a horror movie. The sci-fi elements go by the wayside and the humor largely goes with it. I do enjoy the 1988 version of THE BLOB. I think it's a gross, gooey, great time. I just don't think the underlying cynicism is earned. It feels forced and predictable, slapped on as an extra bit of edgy social commentary. The Red Scare allegory of the original worked because it felt organic. The remake is just angry for the sake of being angry.

While the original film went on to make a lot of money, Russell's film sank at the box office. Both films have since become cult classics and the reason for that lies squarely with their antagonists. The Blob of THE BLOB is a unique, semi-Lovecraftian nightmare, one of the most unique hostile lifeforms ever seen on screen. It wasn't just an oversized bug or a humanoid creature. It's something different, something not easily categorized. A giant, blood red, acidic amoeba with a bad case of the munchies, the Blob has lived on in popular culture for a damn good reason. It's too cool of a creature, too hideous and repulsive, to easily ignore. It sticks in your memory as easily as it sticks to tender flesh. And once it grabs hold, it's nigh impossible to remove. It sticks to your brain. Once seen, it isn't easily forgotten.