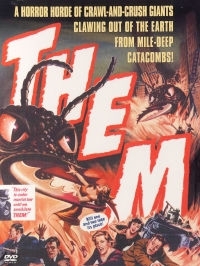 We open in the New Mexico desert sometime in the early 1950s. Two coppers, Ben Peterson and Ed Blackburn, find a young girl wandering near the road, shell shocked and unable to speak. Further up the way, they find her family's trailer torn apart. There are no signs of survivors, only a strange indentation left in the sand by some unknown animal. As the men survey the wreckage, they hear a strange sound, like a whistling. Writing it off as just the wind, the men call for backup.

After forensics arrives, Peterson and Blackburn head a mile up the road to a local home supply store, hoping the owner can give them some kind of lead. They find the place in shambles, the owner lying dead in the cellar. Blackburn stays behind to wait for forensics while Peterson heads off back to the station. That's when the strange whistling sound comes back and Blackburn is killed by something fairly large (and fairly hungry) off screen.

The case goes nowhere, even after Robert Graham, an FBI agent, joins the investigation. Their big break comes with the arrival of Doctor Harold Medford and his daughter (also a doctor) Patricia. Employees of the Department of Agriculture, they had been assigned to examine the plaster cast of that strange indentation found in the sand near the trailer. The Medfords have a hypothesis. The presence of sugar at the crime scenes... The abundance of formic acid in the body of the store owner... The footprint that looks distinctly like that of an ant... There's also the business of the atomic tests that took place in White Sands back in 1945, a stretch of desert not too far from the sleepy town our characters call home.

A close encounter in the desert proves the hypothesis to be true. The atomic age has given birth to a terrifying mutation. Gigantic ants, upwards of 12 feet in length, turned carnivorous from lack of food, are spawning somewhere in the sands. With a small group of military personnel, our band of heroes are able to destroy the New Mexico colony, but not before two queens hatch and fly off to parts unknown. The hunt is now on and the timer is ticking down. Failure to find and contain the ants will lead to mass devastation, if not total human extinction.

THEM! was released in 1954, the same year that saw the Japanese release of the original GODZILLA. While there are a few coincidental similarities between the two (for example, both feature scenes of ships being destroyed by giant monsters and both films stage the reveal of their beasties in practically the same way, with their large heads poking out above rock formations), the real similarity between the two is in their tone. The atomic age sci-fi b-flicks of the 1950s would turn campy a few years later, but THEM! shows no signs of humor, intentional or otherwise, in its presentation. The film plays deadly straight with its subject matter, sometimes even approaching full blown horror movie theatrics.

The first half of the film is the strongest. We begin with a gruesome murder mystery, move quickly into the realm of science fiction, and then swiftly descend from there into claustrophobic horror. The ants, while not particularly convincing, prove to be quite the onscreen spectacle and the descent into the New Mexico formicary is a tense, supremely well executed bit of filmmaking. Unfortunately, Medford's discovery that the nest contained two missing queens signals the transition away from horror-tinged science fiction. From that point on, THEM! becomes more of an action film, complete with the all-too-familiar military worship often found in 1950s b-movies of this sort.

To be fair, although THEM! does become something much more routine in its final half, it's still a great film. The underlying pretense that what we're watching is a serious disaster prevention movie rather than a schlocky cheese fest with big bugs never goes away, and the final ten or so minutes brings the claustrophobic chills back with aplomb. The final attack on the ants takes place in the sewer system of Los Angeles. Tunnels collapse, hordes of giant ants appear from out of the darkness, a lead character we presumed safe bites the dust, and the whole thing wraps itself up in fire and explosions. It's a great, thrilling climax after a shaky second act.

Another departure from the 1950s b-movie norm comes in the final moments of THEM!. Normally when we walk away from films like this, we do so with the comfort that nothing like this will happen again. Nuclear regulatory agencies will tighten their grasp and the military will stand ready just in case the grasp ever slips. But THEM! doesn't have quite the same optimistic outlook. A character mentions the obvious. If the ants were the result of just a single test, what will come of all the other detonations?

Thankfully, the answer to that question was a whole spate of giant monster movies, including IT CAME FROM BENEATH THE SEA, TARANTULA and 20 MILLION MILES TO EARTH. THEM! proved to be as influential in the States as GODZILLA was in Japan, although the giant monster craze was much shorter lived here. The film would go on to inspire video games like the Cinemaware classic It Came from the Desert and the Fallout series, whole scores of pulp writers like Guy N. Smith, and even later science fiction films like ALIENS and TREMORS. It's easy to see why THEM! was such a hit back in 1954 and why the film is still appreciated by sci-fi and horror fans today. It really is a genuinely good film, buoyed by terrific performances and snappy direction, held together with clear sighted seriousness. Is it on the same level of genius as THE THING FROM ANOTHER WORLD? Maybe not, but it most definitely deserves to be remembered as one of the finest atomic age terrors ever to grace the silver screen.